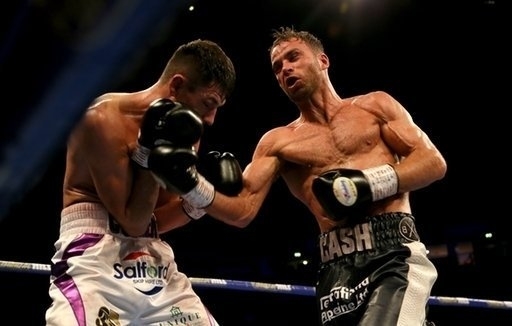 Easily one of the fights of the year so far as Felix Cash and Jack Cullen put on an enthralling all domestic clash to kick off another memorable night of championship boxing in Manchester.

Cullen bit down on his gumshield to survive the first round onslaught of Cash and showed the tenacity of the challenger to stay in the contest but Cash eventually proved too strong getting the job done down the stretch.

Despite the ruggedness of Cullen, Cash's raw power and relentless pressure proved too much for the Bolton man and forced referee Howard Foster to intervene in the eighth.

Both men were shipping lots of punishment and with the Commonwealth middleweight title at stake, neither man was willing to give in and seemed to regather their composure during the exchanges.

Cash needed this break out performance to notify the rest of the division of his threat and mentality to go to extreme lengths to keep his position in the British rankings.

The Sims protégé moves to 12-0 and was quick to call out the 160lb top flight contenders and stated he would dish out the same sort of artillery when they meet beyond the realms of English title level.