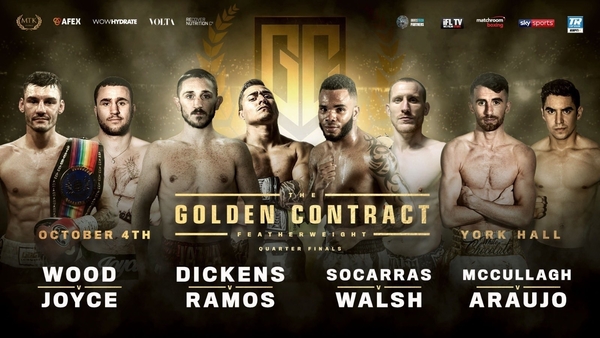 Mouthwatering matchups, unrivalled competition and an iconic venue greets all eight fighters to compete in the very first edition of the Golden Contract at York Hall this Friday night.

Sheffield's Leigh Wood (22-1; 12 KOs) was first to pick at Tuesday's official draw hosted by Repton Boxing Club, a stones throw away from the Hall and went for a tough opener in undefeated Olympian David Oliver Joyce (11-0; 8 KOs)

With each fighter selecting either the Red or Blue coloured balls, this has no bearing on the course of the tournament with the eventual winner having to come through the sternest competition and beating who is in front of them to proceed to the semi final and finals.

With MTK presenting all eight fighters with the opportunity of fighting in front of an atmospheric and holistic crowd at York Hall, there should be no excuses with the fairest possible stipulations paving the way to the Golden prize.

Brought exclusive to Sky Sports and maximising the prime time exposure for all the fighters, for the winner there will be bigger prospects of world title challenges looming.