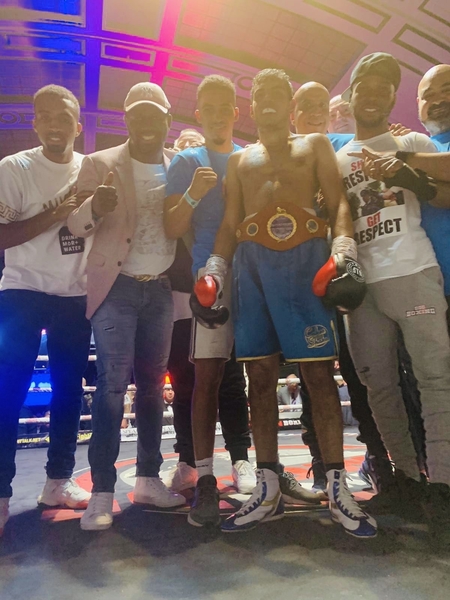 With career expectations heightened and the opportunity to propel themselves into major title contention, the Streetwise Management stable, spearheaded by Mickey Amoo, captivated the Bethnal Green crowd last night with their culminative flare, explosiveness & deceptive styles.

The gym took big cues from IBF Richard Commey's remarkable rise into stardom from his native Ghana and led to Amoo Snr. reshaping his position in the U.K. with young domestic talent.

Often, when the responsibility is passed down onto newer generations and the acceleration of the sport bring new obstacles and barriers to fighters and trainers perhaps through differing promotional networking or terrestrial TV rights, the motivation and optimism of that group of people could diminish but Mickey Amoo Jr, Michael's son who was diagnosed with a cyst on the brain when targeting the transition to the pro-ranks himself, has fuelled this adversity by teaching and nurturing (from scratch) the future of grassroots boxing.

Ramez Mahmood, a full-time Mathematic teacher hence nicknamed the 'MathMagician' carried the winning formula to capture his first bit of treasure with the Southern Area title at stake and the adulation expressed in the ring after epitomised the family theme resembling Streetwise and their template for success at all levels.

Meanwhile, another undefeated prospect Jordan Dujon whose been highly touted by Mickey and the rest of the team to do exceptionally well at a young age already, blistfully went the full 4-rounds and came out a unanimous winner on all scorecards taking on a rugged Duane Green whose competed at English, borderline British-level.

Elsewhere, Ryan Walker who came up short for the coveted English title, had a shorter night than expected with Bulgaria's Stefan Sashev complaining of a hurt shoulder stopping a.k.a Phyz from getting valuable rounds under his belt and pushing on. Nonetheless another box ticked in his rejuvenated career.

Arguably performance of the night came from another debutant, Kola Koyejo. Hailing from Stonebridge Boxing Club who have recently been put on the map with the accomplishments of Mikael Lawal in winning the latest Ultimate Boxerr competition in Manchester, the talented Koyejo obliterated his opponent in less than three minutes to get his name out there and be made aware of the talent passing through the North-West London club.