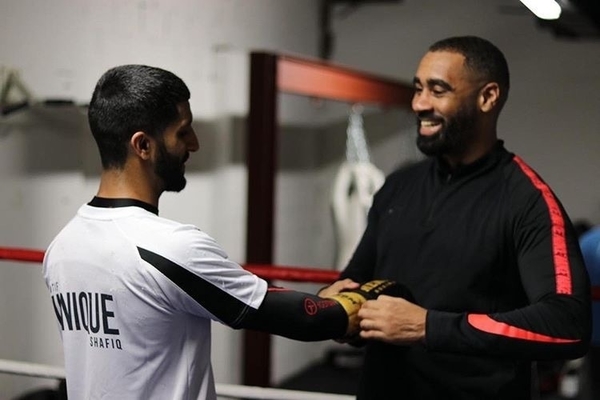 Shafiq ready to steal the show on huge Loma bill

They formed a strong dual-partnership over the past months but Haroon Headley and Atif Shafiq are ready to step it up a notch and make their presence felt on the biggest of stages come Saturday night at the O2 Arena (London).

The newly established Manchester based stable have the chance to derail James Tennyson's revived world title plans and make a case for themselves to be at the top with the WBA International Super-featherweight title to be contested on the marquee Lomachenko- Campbell bill.

Stacked from top to bottom with world title fights and promising crossroad battles, Tennyson-Shafiq has all the ingredients to be a competitive 50-50 affair with both men knowing exactly what's at stake for their respective careers.

The amicable split from Dominic Ingle came as a surprise to most hardcore boxing fans and onlookers with the Sheffield stable seemingly booming, having acquired WBO super-middleweight world champion Billy Joe Saunders and middleweight machine Liam Williams whose on course for his shot at the WBC 160lb title by ranking.

We caught up with the 25-year old Yorkshireman about the prospect of fighting on such a major bill with pound for pound supremacy on the horizon and getting closer to a shot at world honours with the Northern Irishman, Tennyson, falling short to Tevin Farmer's IBF strap last October and subsequently making a case for that credibility:

1) How did the opportunity vs Tennyson come about?

Shafiq: "My manager [Dave Coldwell] phoned me up and said there's a fight for ya on the Lomachenko-Campbell undercard and I said yes, it's that simple. I said yes straight away. I know Tennyson, I've seen him, I know what he's about, I know his style. I know, as long as I'm at my best, I'll beat him. There was no doubt in my mind, I said YES straight away!'

2) How's training up in Manchester been, teaming up with Haroon Headley and how will this move aid this phase of your career do you think?

Shafiq: Training up in Manchester [with Haroon] has been wicked! It's been very very good. I've got the focus and attention that I needed. Everything has worked around me and what is needed for August 31. We've had good sparring, good preparation, conditioning work at Sheffield Hallam University with Boxing Science (Danny Wilson), that's been wicked. My diet with Greg Marriot (nutritionist through his diet) has been fantastic, so really, the preparation has been ideal, it's been perfect. So... come Saturday night, I'll have no excuses and I will definitely win!'

3) Is this the type of test [vs Tennyson] you need excel under the brightest of lights on the biggest of stages?

Shafiq: "This is exactly the sort of fight I need at this stage of my career. You know, if you go through my record, the challenges that I've had in front of me, the tough challenges on the big stage, I've always performed. So I believe, Saturday night is going to be no different. This is another step up and it's another one that I'm fully focused and one I'm fully confident of overcoming, putting on another masterful performance.

4) Was Tennyson a realistic target for you?

Shafiq: "To be honest, Tennyson, if you look at rankings, he's quite a bit ahead of me. There's a few of the guys in between that I could of fought but erm... this opportunity came up and again like I said, I'm confident in my own ability and exactly what I'm capable of what I'm going to do on Saturday night. It depends what way you're looking at it, it's a target that I'm going to go through [on Saturday night].

5) Is this option paving the way for going down an alternative route as opposed to the traditional domestic honours: English, Commonwealth, British etc?

Shafiq: "Yeah, winning the WBA INTERNATIONAL title is going to be nice. It'll look nice over my shoulder. We can come back down to British level, I'm not really worried about English level after this at all, but if the British or Commonwealth title becomes vacant we can go for that or if we want, we can down the international route and keep my options open."