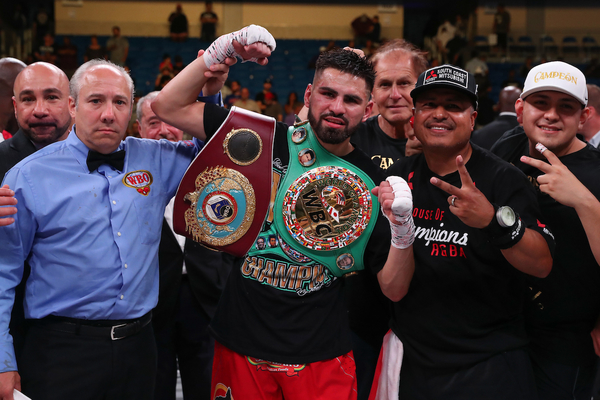 The Arlington crowd were on their feet throughout the contest as both men aimed to solidify their position at the top of the super-lightweight pecking order.

Additionally, with conflicting promotional networks in competition with one another, Bob Arum's Ramirez and Eddie Hearn's Mighty Mo put all their controversial broadcasting disputes to one side and both put on a display to millions around the world watching on ESPN, Sky Sports (exclusive to the U.K. audience) & DAZN International in foreign territories.

The previously undefeated Hooker was instantly shaken by Ramirez' very first punch and refuted the exchanges in order to regather his senses and attempt to nullify the resilient Mexican's pressure tactics.

The second round gave Ramirez more confidence, detering Hooker's long jab and range to back the Texan onto the ropes and apply more pressure.

The multiplicity of shots ambushed Hooker and took the 29-year old by surprise, as the 26-year old Ramirez grew into the fight landing consecutive successful blows to the head and body.

Prior to the onslaught in the sixth, Hooker couldn't readjust and set his feet enough to get into range and have success of his own, leaving gaping holes in his defence for Ramirez to exploit.

The referee interfered when Hooker look shaky and disorientated on the ropes with his head snapped back as Ramirez stepped in and unloaded his detonating bombs on the WBO predecessor.

Meanwhile, IBF champion Tevin Farmer made the fight defence of his title against French mandatory challenger Guillermo Frenois and eyed an immediate unification clash with bitter US rival Gervonta Davis after his impressive 2nd round shutout of Ricardo Nunez in Baltimore.

Speaking of unifications and mouthwatering clashes to come this year, the WBSS super-lightweight final between Regis Prograis and Josh Taylor will be in line for the ultimate prospect of undisputed king vs Ramirez.