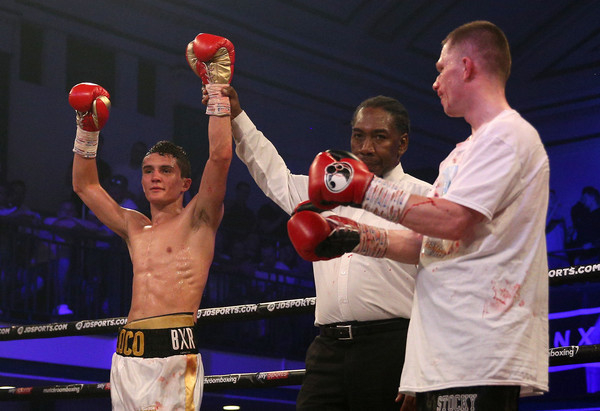 The term 'Gentleman' is often thrown around in the boxing world except the very minority of honest and disciplined fighters who circle around the wider fraternity.

Both Jordan Gill & Louie 'Loco' Lynn have positioned themselves as the next crop of top-prospects coming through the ranks and the pair have been involved in a recent social media conversation about when they should fight.

Gill, who is highly touted to fulfill his potential in the paid ranks, having suffered his first defeat to Enrique Tinoco and took the loss as a 'learning curve' moving forward, following his win over Emmanuel Dominguez in three brutal rounds, has remained hopeful of a rejuvenation phase.

The 25-year old Mexican steps up to the plate to challenge former multiple world champion, Carl Frampton who held the IBF super-bantamweight title (-September 2014 until February 2016) before unifying the division against bitter rival Scott Quigg for the WBA crown also.

Tinoco would present a tough test for any unbeaten prospect coming up (with Gill at 22-0 prior to the knockout defeat) and the thoughts of fighting another hungry, unbeaten fighter presents a whole new psychological dynamic.

Mitchell, carries his fortunes and fan-friendly profile with the British and Commonwealth honours to his name between 2006 and 2009 and subsequently challenged for the lightweight world crowns in 2012 and 2015.

The tutelage will only aid Lynn in the long-term ambitions of replicating the successes of his head coach and ultimately train him for the world title fights in the not so distant future and challenge that winners mentality.

The former senior ABA and Nationals elite champion talks about the problems and detriment of politics and infringements from improving the unblemished 4-0 (4KOs) spreadsheet.

The fusion of crossover channels and platforms won't be a problem here from this mega all-British clash from taking place with both men under the Matchroom promotional banner & the same attitude to fight the best at whichever stage of development they may be.

However, Lynn was due to feature on last Saturday's British title dust-up between Daniel
Dubois and Nathan Gorman having signed a multi-fight deal with Hall of Fame promoter Frank Warren and an exciting asset to the card.

Similarly, both men attained outstanding amateur pedigrees with Gill also finishing off his polished career in the unpaid tiers with the Senior ABA title, 42 wins from 50 contests.

Following on from this, Lynn narrowly lost out to fellow unbeaten prospect Lee McGregor (7-0) in the Tri-Nations final on controversial terms, many tipping Lynn to the nod in that exchange.

The seeds have been planted for both to succeed in the pro-levels and go one step further in reaching their goals.

The shock of this inactivity will only retract his past self and spur Lynn onto exceed those limitations and challenge his career to the limits.